Decision Trees and Pruning in R

Decision Trees and Pruning in R

Learn about using the function rpart in R to prune decision trees for better predictive analytics and to create generalized machine learning models.

Decision trees are widely used classifiers in industries based on their transparency in describing rules that lead to a prediction. They are arranged in a hierarchical tree-like structure and are simple to understand and interpret. They are not susceptible to outliers and are able to capture nonlinear relationships. It can be well suited for cases in which we need the ability to explain the reason for a particular decision.

In this piece, we will directly jump over learning decision trees in R using rpart. We discover the ways to prune the tree for better predictions and create generalized models. Readers who want to get a basic understanding of the trees can refer some of our previous articles:

Once we install and load the library rpart, we are all set to explore rpart in R. I am using Kaggle’s HR analytics dataset for this demonstration. The dataset is a small sample of around 14,999 rows.

Then, we split the data into two sets, Train and Test, in a ratio of 70:30. The Train set is used for training and creating the model. The Test set is considered to be a dummy production environment to test predictions and evaluate the accuracy of the model.

Next, we create a decision tree model by calling the rpart function. Let’s first create a base model with default parameters and value. The CP (complexity parameter) is used to control tree growth. If the cost of adding a variable is higher then the value of CP, then tree growth stops.

If we look at the summary of hr_base_model in the above code snippet, it shows the statistics for all splits. The printcp and plotcp functions provide the cross-validation error for each nsplit and can be used to prune the tree. The one with least cross-validated error (xerror) is the optimal value of CP given by the printcp() function. The use of this plot is described in the post-pruning section. 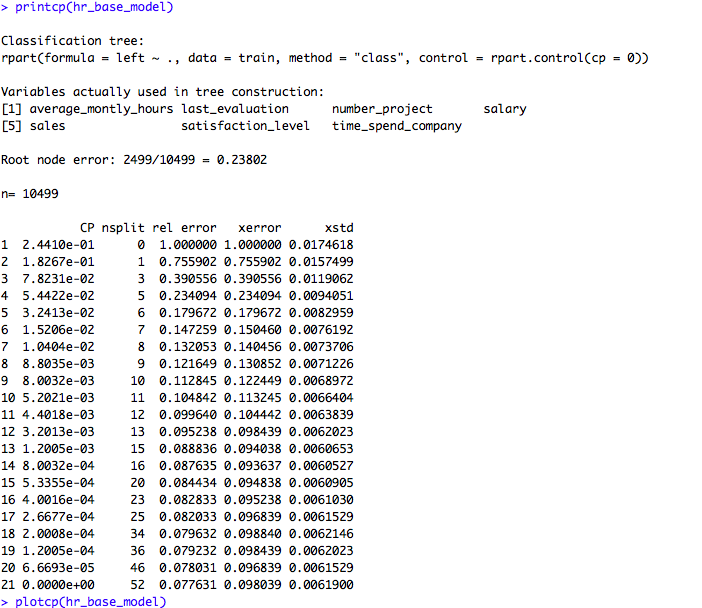 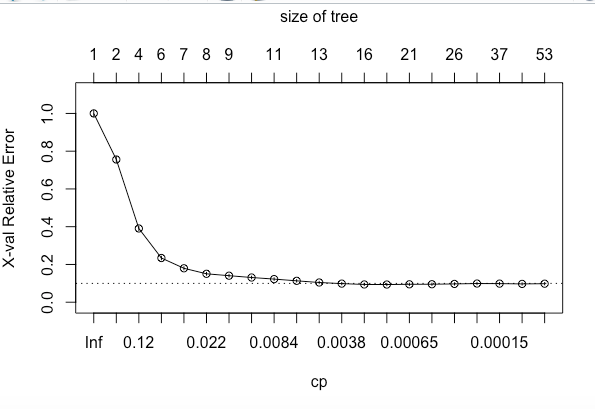 Next, the accuracy of the model is computed and stored in a variable base_accuracy.

There are chances that the tree might overfit the dataset. In such cases, we can go with pruning the tree. Pruning is mostly done to reduce the chances of overfitting the tree to the training data and reduce the overall complexity of the tree.

There are two types of pruning: pre-pruning and post-pruning.

The idea here is to allow the decision tree to grow fully and observe the CP value. Next, we prune/cut the tree with the optimal CP value as the parameter as shown in below code:

The accuracy of the model on the test data is better when the tree is pruned, which means that the pruned decision tree model generalizes well and is more suited for a production environment. However, there are also other factors that can influence decision tree model creation, such as building a tree on an unbalanced class. These factors were not accounted for in this demonstration but it’s very important for them to be examined during a live model formulation.